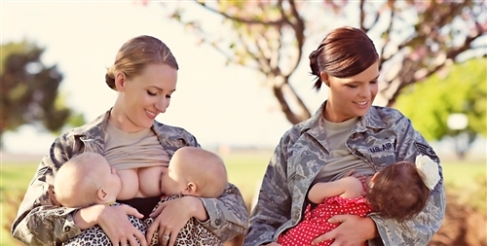 Is breast-feeding while in uniform conduct unbecoming to a military mom?

The debate over nursing in public got a new layer recently, when photos taken on an Air Force base began to circulate online. In the series of tasteful professional photos showing beaming moms as they nurse their kids, one jumps out: the photo of two servicewomen with their uniform shirts unbuttoned and hiked up to breast-feed.

“A lot of people are saying it’s a disgrace to the uniform. They’re comparing it to urinating and defecating [while in uniform],” says Crystal Scott, a military spouse who started Mom2Mom in January as a breast-feeding support group for military moms and “anyone related to the base” at Fairchild AFB outside Spokane, Wash. “It’s extremely upsetting. Defecating in public is illegal. Breast-feeding is not.”

It was Scott’s idea to ask photographer Brynja Sigurdardottir to take photos of real-life breast-feeding moms to create posters for National Breastfeeding Awareness Month in August. One of the moms photographed in uniform, Terran Echegoyen-McCabe, breast-feeds her 10-month-old twin girls on her lunch breaks during drill weekends as a member of the Air National Guard.

“I have breast-fed in our lobby, in my car, in the park … and I pump, usually in the locker room,” she says. “I’m proud to be wearing a uniform while breast-feeding. I’m proud of the photo and I hope it encourages other women to know they can breast-feed whether they’re active duty, guard or civilian.”

She said she’s surprised by the reaction to the photos, which also feature her friend Christina Luna, because it never occurred to her that breast-feeding in uniform would cause such a stir.

The Air Force has no policy specifically addressing breast-feeding in uniform, according to Air Force spokesperson Captain Rose Richeson, who added, “Airmen should be mindful of their dress and appearance and present a professional image at all times while in uniform.”

Robyn Roche-Paull has been advocating for such a policy since she left the U.S. Navy 15 years ago. Her challenges in breast-feeding her son while on active duty – she recalls her “flaming red face” upon being reprimanded for nursing in a medical waiting room – prompted her to write a book called “Breastfeeding in Combat Boots” as a resource for military moms. She is now an International Board Certified Lactation Consultant who remains close to the military through her active-duty husband and her blog for military moms.

“If you follow the comments on my blog, a lot of the comments are that the breast-feeding mothers are the ones who need to be covered up. Nobody sees anything wrong with bottle feeding mothers or fathers,” she says. “Asking mothers to feed a baby by bottle when they are together, simply because they are in uniform, can both affect the mom’s milk supply and her willingness to keep breast-feeding or stay in the military. It’s simply one more barrier they have to face.”

The criticism of the photo goes beyond the usual nursing-in-public debate, though. One commenter on Roche-Paull’s website who identified herself as a retired captain in the Marine Corps said she advocated for breast-feeding moms in the military and now, as a civilian, she nurses freely on base. However, she writes:

“I would never nurse in uniform. I took my child to the bathroom or a private office when her nanny brought her to me …. Not because I was ashamed of nursing, nor of being a mother. All the guys knew I pumped. The military is not a civilian job. We go to combat and we make life or death decisions, and not just for ourselves but for those we lead. The same reason I would never nurse in uniform is the same reason I do not chew gum, or walk and talk on my cell phone, or even run into the store in my utility uniform. … We are warfighting professionals. Women before us have worked too hard to earn and retain the respect of their male peers. I don’t want my Marines to look at me any other way than as a Marine. When I am asking them to fly into combat with me and do a dangerous mission, I do not want them to have the mental image of a babe at my breast. I want them to only see me as a Marine. Let’s be a realistic folks. We give up many freedoms being in the military…Breastfeeding in front of my fellow Marines was one of them.”

Another commenter on the blog replies:

“There is N-O-T-H-I-N-G more authoritative than a strong mother standing tall breastfeeding as she barks orders. It’s AWESOME that you’ve worked so hard promote breastfeeding, but I think you *might* be selling yourself short.”

The women in the photo have given some thought to the whole question of military versus maternal duties. To those who believe breast-feeding in uniform undermines the authority of a female officer, Echegoyen-McCabe says:

“I guess my thoughts are, if you don’t want to breast-feed in your uniform, you don’t have to. But you should have respect for those who do. … If anything, it should make people look at you as someone who is able to multitask.”

Pamela Sitt is a champion multitasker who lives in Seattle. She blogs about motherhood on her website, www.clarasmom.com.

http://www.brynjaphotography.com/?p=4377 A photographer captures the beauty of breastfeeding women.