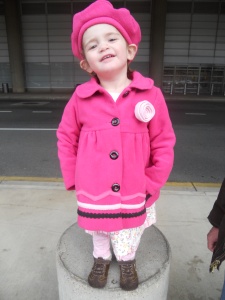 The other day on a mothering blog someone was wondering how to get her three year old to stop screaming in her crib at night when the lights were turned out. She said she didn’t want her child to get “attached to co-sleeping” because she was three (which I am assuming means she wants to prioritize independence and self-reliance).

I replied that her child might be screaming when she is put in her crib because she is frightened. She might need the emotional support of her primary caregiver right now. I think so many people believe that it is important to “toughen up” our young children; to prepare them for the harsh realities that the world has to offer; to make them independent and strong as soon as possible.

I think that one of the greatest misunderstandings about attachment theory and the parenting practices that arise out of these theories is that the parenting adults do not want to help in the creation of strong and independent children. In actuality, they do. Just not at the age of three and not in this manner.

Between birth and five there is so much is going on neurologically in a child’s brain that it is almost unfathomable. These critical years set the stage for a child’s patterns of behavior. Their brains are developing at a quick pace and they are learning important physcial, social and emotional skills–all this and so much more. These are the vulnerable and the impressionable years. These are the years that children need to learn they can trust adults to meet their needs. This will serve as the foundation for their interactions with other children and other adults in the future..

The commonly-held misconception that children who sleep in their parent’s bed, or whose emotional needs are met consistently year after year, will somehow end up dependent and needy, is far from the truth. What many people don’t understand is that by consistently meeting the emotional needs of you child in the early years, you are paving the groundwork for future success and independence.

On the blog, I summed up my response with the following advice and metaphor: “Prop them up now so they can stand on their own later.”
I think this quote and idea captures the essence of what attachment theory teaches us about child development and about parenting practices that best meet the needs of your child.

So keep on responding to your child. A child screaming in the dark is afraid. He or she may be experiencing anxiety from the caregiver separation. Being left alone in a mostly dark room is not comforting and could even be traumatizing depending on the length of separation. Find out what your child needs and help them to get the input or reassurance that they need.

Again, Prop them up now so they can stand on their own later. You’ll be happy you did. Your child will be happier, more confident and better able to form happy, healthy relationships as an adult. All the things you wanted for your child and more.