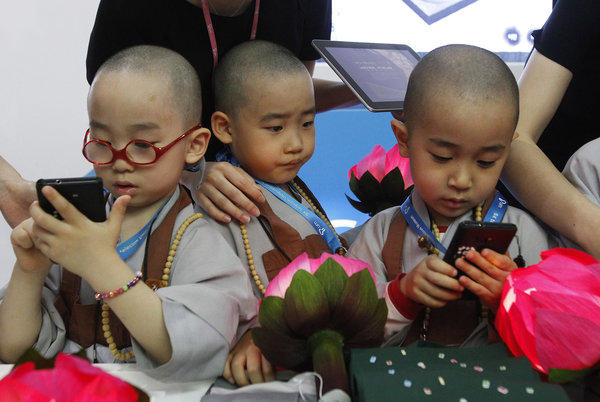 This article illustrates a major problem in today’s society of child-rearing: Parents don’t see screen time as an issue with their children. According to this research article, content is a concern to parents, but QUANTITY? Not so much.

Are kids getting too much screen time? Parents aren’t sweating it

Among the zillions of decisions that moms and dads make about how to parent,  it might seem that determining the appropriate amount of time young children can spend watching TV and playing on tablets and smart phones might be big one.

But it turns out that’s not the case. Most parents of children younger than 8 don’t give the matter much thought, researchers from Northwestern University found in a recent study.

Just 31% of the 2,300 parents surveyed expressed concern about their children’s media and technology use, while more than 55% of parents said they are not worrying about the amount of time their children spend staring at screens much at all.

And while 38% of parents said they were fearful their children could get addicted to hand held devices like tablets and smart phones, 55% said they aren’t sweating it.

(If you are anything like me, and have had the experience of trying to pry an iPhone out of the clutches of a screaming 2-year-old, you are now feeling very out of sync with your fellow American parents).

“It was completely surprising to me,” said Ellen Wartella, director of Northwestern University’s Center on Media and Human Development and the lead researcher on the study in an interview with the Los Angeles Times. “It’s a generational shift. What we are seeing is a generation of parents who recognize that what kind of content you are exposing your kids to matters more than how much.”

The study, titled Parenting in the Age of Digital Media, held other surprises as well. For example, although 71% of parents had a smartphone in the home, nearly the same percentage said they did not think that having a smartphone or tablet device made parenting easier.

The study also revealed that most parents do not rely heavily on digital devices to distract their children. When Mom or Dad needs a moment to cook dinner or clean up the house, parents said, they are more likely to set their kid up with a toy or an activity (88%), a book (79%) or TV (78%) rather than handing over a smartphone or tablet (37%).

“Parents have a lot of tools they can use and media and technology are just one of those tools,” said Wartella.

Finally, the researchers found children’s media use is largely determined by the media environment that the parents have established in the home, rather than the result of a media obsessed kid clamoring for just one more show, or just one more app.

Of the families interviewed for the study, 38% fell into a category the researchers dubbed  “media-centric.” These are families where the parents enjoy watching TV and using the computer and smartphone at home, spending an average of 11 hours a day looking at various screens. The children of these parents, on average, spend four hours and 40 minutes a day looking at screens, the researchers found.

Some 45% of families fell into a “media-moderate” category where the parents spend a little less than 5 hours a day looking at screens. Their children, in turn, look at screens just under three hours a day.

And children in “media-light” families, where parents spend less than 2 hours a day looking at screen media, look at screen media themselves for an hour and 35 minutes on average.

“Instead of a battle with children on one side and parents on the other, media and technology has become a family affair,” the researchers conclude.