So, the truth comes out. I’m kind of a nerd.

I made this bacterial fungal fermented tea at my house that is supposed to be full of probiotics and other good stuff and I’m super excited. I was even more excited until I found out it could make you sick or kill you (very rare).

But then I figured that people have been doing this for thousands of years so how bad could it really be. Also, one of the arguments is that there haven’t been any human studies (only animal studies and, interestingly, Kombucha did not harm rats and in some instances resulted in health improvements on the little guys).

Then a friend of mine made an interesting point. She said, “I figure the large population of people making Kombucha at home IS our human study.” Very wise. If Kombucha were killing people right and left we’d be hearing a lot more about it. The Bird Flu and West Nile Virus get a lot more attention than home-Kombucha-making ever has so I figure I should be good to go. I have been told that if you’re immuno-suppressed or compromised this might not be the drink for you.

The only thing you really need to watch out for is the mold and there are a lot of pictures and descriptions on the web to help you with that. The samples below do NOT have mold on them. Based on my research, I have deemed these healthy Kombucha samples.

Although you might think the above three pictures of the same bottle of Kombucha is moldy, it’s not. That big blob of stuff is called a scoby (symbiotic culture of bacteria and yeasts). The scoby eats the sugar and ferments the brewed tea that I added to it. The brown specks are from loose tea that made its way into the jar. The white part is actually smooth, not fuzzy like you would see on cheese.

If it is fuzzy like the mold you find on cheese or bread then you throw everything out and start fresh. I looked for information telling me I might die from the mold but I couldn’t find anything that remotely suggested that, so that was comforting.

So here’s some good info: “Mold tends to grow especially when the Kombucha mushroom is lifted out of the liquid by its own gases. Keeping it covered with liquid in the later stages, i.e. when the new Kombucha mushroom starts growing, can successfully prevent mold from growing.” (Wikipedia)

With each batch a new round white disc grows on the top. This is the new Kombucha “mushroom” as some like to call it. Also, I read that it is important to disinfect and clean your hands and the jars with white vinegar, not soap. Somehow soap can lead to the introduction of bacteria.

Below are various views of the same jar of seven-day fermented Kombucha. You’re not supposed to fiddle around with the stuff while it is brewing. I did take a peek a few times to make sure I didn’t see any mold growing. It was interesting to watch the bubbles start to develop as the yeast and bacteria were eating up the sugar. Similar to the process of rising when you make bread.

So the way you make Kombucha is to brew about a quart of tea and dissolve a little over a cup of sugar in the warm liquid. When it is warm (not hot) add it to the scoby that is resting in your gallon jar in a few inches of water or Kombucha from the last batch.

Fill the remainder of the jar up with water leaving a few inches of room at the top.

Cover the jar with a paper towel and put a rubber band around the top. This is to prevent fruit flies from getting in. I had fruit flies in my kitchen from the compost and they didn’t bother my Kombucha in the dining room at all.

The Kombucha needs to be stored in a warm, dark place. Some people store their Kombucha in a dark cupboard but my cupboards are all full so I left it on the dining room table with a towel over it to keep out the light.

Brewing takes a minimum of seven days. The further out from seven days you go the more acidic or vinegar-like it gets. I prefer it a little sweeter so I went right up to seven days and then took it out.

I have a second jar I’m going to let go until 10 days so I can see what the difference in taste is. If you let it go several weeks it will get to some vinegar like state and you can do something with that but I’m not sure what. You can also experiment with green and black teas. Some say they need to be caffeinated. Teas with oils as flavors (like Earl Grey) are not recommended as they can harm the scoby.

Flavors from fruits can be added later, after the brewing is done, but I haven’t tried that yet either.

On the left, the jar with the paper towel on it has a scoby on the bottom. This is my scoby hotel where I am going to store my scobies for use as I want them. The jar on the right is the one that I haven’t poured into jars yet and am going to let ferment for a few more days.

WHAT TO DO WHEN IT IS DONE

Below you will see the plastic and glass jars that I poured my completed Kombucha into. I will store them in the fridge until I’m ready to drink them. I’m hoping they won’t lose their carbonation in the larger containers if I only drink some at a time. I think it will be like any soda. If there is a large amount of air in the container, the Kombucha will eventually lose its fizz. 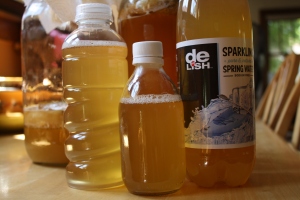 Refrigerate, drink and enjoy! I know I will. Hopefully I’ll survive 🙂

My mother was around 11 years old when she got sick with what they thought was the flu or some similar illness. During the course of the illness, she got up in the middle of the night to go to the bathroom and fell to the floor. She would never walk again without the aid of a crutch and a brace. She was separated from her family for months while she was treated for polio during the epidemic that swept the country. Today, she has some signs of post-polio syndrome. Daily chores are made more difficult; walking is not easy. She’s an amazing woman and has taken on this disability with pride and dignity. As I think about my own child, I would be devestated to watch her go through the same experience. I would not wish such a disease on any child, in any country, especially when we have the medical knowledge to take action.

Save the Children http://www.savethechildren.org is an organization dedicated to bettering the lives of children around the globe. This is one of their actions.

Volunteers across South Sudan are battling to eradicate polio among children under five in South Sudan, through a five-day “house to house” campaign. The campaign is organized by the South Sudan health ministry, and Save the Children is supporting it by lending vehicles and in Mvolo county. The effort is to catch the children who have not been vaccinated at a health centre or through an outreach program.

To ensure that children get the two drops each of the polio vaccine, vaccinators must walk for long distances, where they find families eagerly waiting for them. Villages are far apart and roads are very poor, so vaccinators have to trek long distances between each village on foot or by bicycle. In Mvolo, Western Equatoria state, the mobile immunization team shared their experience with me, of conducting house-to-house immunization in the county.

“It is difficult for us to achieve full immunization here in Mvolo County, because there is a big population that stays deep in the rural areas. They’re not easily accessible. In Lessi Payam, five of the villages are not reachable and this is a big challenge for us,” said County Health Officer William Dalli.

“I have no bicycle to move around when I am carrying out the immunization, so I move on foot. It is very far because the families live far apart and I have to go to each family,” Asumpta Achol shares.

Those who have bicycles face challenges too: “I use my own bicycle, but when it breaks down, it becomes difficult for me to move. Even with the bicycle I get tired when I ride for the whole day,” says Manase Dogbanda.

Save the Children conducts vaccination against polio, measles and tetanus on a regular basis both at health facilities and in outreach programs. We also provide support to the annual nationwide immunization campaign, alongside World Health Organization (WHO) and UNICEF. South Sudan is one of few remaining countries that still has a serious polio problem and the disease has crippled many children.